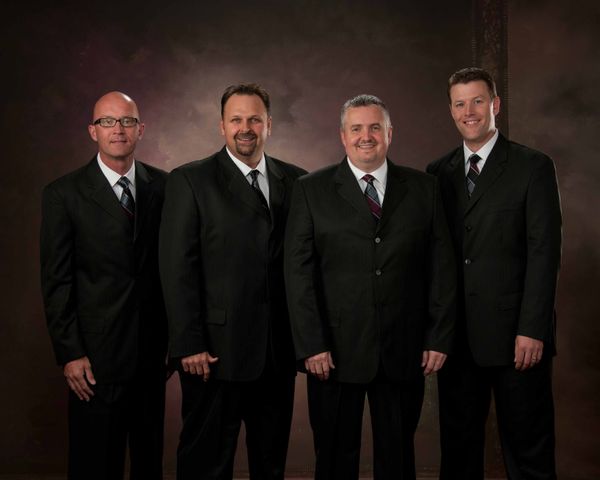 The Heirborn Quartet was founded in 1993. Prior to 1993, the group traveled several years as the Glorybound Quartet. In 1993, while recording their second project at Mark V Studio, the producers suggested a name change. After much prayer and many names being tossed around, the name The Heirborn Quartet was selected. The name comes from the idea that we are born heirs of the King.

The group had its origins back many years ago in Rockmart, Georgia. Mark Garrett, current lead singer, and Mark Lumpkin, current tenor, formed a group with two childhood friends. After a short period of time, Mark Garrett's cousin took over the baritone position. With four stable parts, the group began to travel around to local churches, mainly doing revival appointments.

In 1987, the group added a bass guitar player and a drummer to go along with its pianist. Now traveling with a three piece band, the group began to focus on doing mainly weekend appointments. In 1990, the group's bass singer chose to leave to focus on his preaching ministry. That spring, Greg Gober joined the group as the new bass singer.
In 1993, the name change took place, as well as a personnel change. Filling the baritone position was Chris Barker. The group was now made up of Greg Gober, bass; Chris Barker, baritone; Mark Garrett, lead; and Mark Lumpkin, tenor. With the group now firmly intact, Heirborn began to embark on better recordings and set traveling to the weekends.
In 1994, Heirborn signed with famed Southern Gospel producer Eddie Crook on the Cedar Hill label. During two years with Cedar Hill, the group recorded two projects and released three singles.
In 1997, the group began producing its own projects with well-known engineer Danny Brown at Southern Sound in Knoxville, TN. The group has recorded several projects there with some of the top musicians in gospel music.
In 2000, Heirborn recorded its first live recording. This live CD and cassette was accompanied by another first for the quartet, a full length VHS tape. In 2003, Heirborn's tenth anniversary was celebrated with a second live recording. This event was a great milestone reached by the group. This event brought back former members of the group and was attended by almost one thousand close friends who have played a big part in Heirborn's success throughout the years. This recording produced a CD, a cassette, a VHS tape and another first for the group, a DVD.
Jason Taylor joined the group in late 2006 to sing baritone. Heirborn enjoyed four years with Jason before he left the group in January of 2012. Shortly after, as God would have it, the door opened for Chris Barker to return as baritone to The Heirborn Quartet. Now, Greg Gober, bass; Chris Barker, baritone; Mark Garrett, lead; and Mark Lumpkin, tenor are excited to see what the future has in store for Heirborn and can not wait to experiance the blessing God will bring.
Although many changes have taken place over the years, Heirborn has never lost their focus of what this is about. Heirborn’s focus is to uplift the name of our Lord and Savior Jesus Christ and to try and bring the lost to the Lord.

ALWAYS KEEP HEIRBORN IN YOUR PRAYERS.